An RACV proposal to lower speed limits on regional back roads is a harebrained idea that lets the Andrews Government off the hook for its chronic under investment in country roads, according to local MP Melina Bath.

The Nationals’ Member for Eastern Victoria Region, Melina Bath said the RACV should be lobbying for more investment into regional roads, rather than urging the Andrews Labor Government to drop speed limits.

“The Andrews Government has already said it wants to lower country speed limits. It’s concerning that the RACV has adopted this lazy solution,” Ms Bath said.

“Instead of cutting speed limits in country Victoria, the Andrews Government should be investing in improving our rural roads that are riddled with potholes and poor quality patch ups.”

Ms Bath said the RACV’s comments that it would take too long and be too expensive to make country roads safe highlights the city-centric thinking that is leaving rural and regional Victorians behind.

“So-called “back roads” are often the only ones we can travel. The idea that lowering the speed on back roads to force country motorists onto main roads is ludicrous and shows a lack of understanding.

“Country people should be able to go about our daily business on decent roads without being made to slow down on substandard ones.

Ms Bath said the Andrews Labor Government must use the upcoming State Budget to fix the disgraceful imbalance between metropolitan and regional Victoria and commit a significant spend to get rural and regional roads up to scratch.

“Labor has been in government for 17 of the last 21 years and has failed to maintain our regional road network,” Ms Bath said.

“Instead, they have spent more than $25 billion to cover cost blowouts on city infrastructure projects.

“Some of that money Labor has wasted could have been invested to fix notoriously dangerous, narrow roads in Latrobe Valley like Brown Coal Mine road in Yallourn North, Glengarry West road, Tramway road and Hazelwood North road which connects Churchill to our main towns.

“These important regional roads all provide a principal route for the movement of people, connect our satellite towns and are public transport routes – instead investing in shoddy patch up jobs that don’t last, real regional road investment must take place.

“The stark contrast on roads infrastructure spend between regional Victoria and the metro region is mind-blowing.

“Daniel Andrews is splashing $14.8 billion on 75 level crossing removals in Melbourne, while in the last state budget allocated only $3.8 million for the entire regional roads and rail network in Victoria.

“The only way to make our roads safer is to invest in fixing them – and not just installing wire rope barriers and lowering speed limits – by actually rebuilding road surfaces and clearing roadside vegetation.” 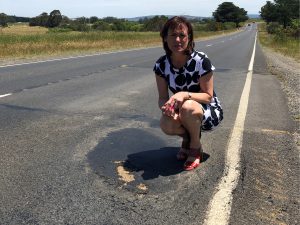