“Increased road traffic in Leongatha and an increase in walkers and cyclists on the incredibly popular Great Southern Rail Trail has continued to compound the multiple safety issues faced by the local community,” said Ms Bath.

“A heavy vehicle bypass was mooted to get trucks out of Bair Street, but has created a new problem.

“Attempts to improve road safety by Regional Roads Victoria have failed, much to the frustration of locals.

“The Andrews Government must revisit the plans for a bypass to properly address the intersection’s ongoing safety issues – it’s a disaster waiting to happen.”

Ms Bath said this intersection is a nightmare to navigate – it’s highly dangerous and very confusing for drivers, pedestrians and cyclists alike.

“Many locals actively avoid the poorly designed intersection, however for unsuspecting visitors to Leongatha, it presents safety challenges regardless whether you’re a motorist, a pedestrian or a cyclist.

“There continues to be many near misses on this intersection and the Andrews Government cannot keep ignoring the hazard.

Ms Bath said the dangerous intersection was not a new hazard, the Leongatha bypass plans were drawn up 20 years ago when she was a local small business owner.

“Frustratingly for locals, the heavy vehicle bypass is only half finished and Regional Roads Victoria needs to get on with stage 2 to fix this dodgy intersection.

“It’s unacceptable for regional Victorians when they see Labor continually pumping billions of dollars into Melbourne infrastructure projects to shave a minute or two off travel times and Gippsland road safety projects are left to languish.

“If this was a level crossing in Melbourne, this unsafe Leongatha intersection would be long gone.

“Many locals are tired of seeing the Premier boasting about his billion dollar level crossing removals and Melbourne road upgrades, when a 20 year old road safety issue continues to be ignored.

“The Andrews Government must immediately commit to Stage 2 to bypass heavy vehicles and improve road safety for Leongatha residents.” 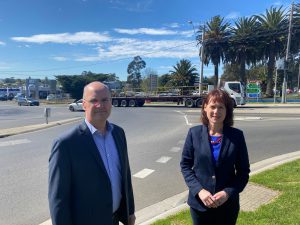