Forestry workers are a step closer to facing increased culpability and liability after the Andrews Government refused to support amendments to the Forests Legislation Amendment (Compliance and Enforcement) Bill 2019 in state parliament today.

The Nationals Member for Eastern Victoria Region Melina Bath said Labor has ploughed ahead with its diabolical Bill which will introduce oppressive legal implications for timber harvesters, contractors and the state-owned enterprise, VicForests.

“Through the enforcement of a strict liability clause, the presumption of innocence for timber workers and VicForests will now be devastatingly removed,” said Ms Bath.

“During debate the Andrews Government admitted it failed to consider alternatives to the Bill’s strict liability clause.

“Our forest workers will face massive penalties, for unwittingly breaching the Code of Practice.”

Under questioning from Ms Bath, the Andrews Government confirmed prosecution could also be brought against TAFE forestry trainees and DELWP employees under its legislation.

Ms Bath said the Andrews Government’s heavy handed action is unprecedented, with no other industry operating under these conditions.”

“Labor even refused to answer why this change is needed in the first place – there has been no prosecution in the past two years and only one unsuccessful prosecution in 2018 for the industry,” said Ms Bath.

“The Nationals and Liberals sought to introduce a number of critical amendments to the Bill, including the removal of the controversial strict liability provision.

“The Bill represents another unjust and unfair attack on timber jobs by Daniel Andrew.

“The Andrews Government is persecuting Victorian forestry workers by ramming through flawed legislation.”

Earlier in the day Ms Bath presented a petition on behalf of Forest and Wood Communities Australia demanding the Andrews Government Legislative Council to reject the Forests Legislation Amendment (Compliance and Enforcement) Bill 2019.

“Timber workers and supporters were urging the Andrews Government to back down and stop its relentless pursuit of its forestry Bill and timber workers.

“Instead Labor abandoned timber workers and failed to listen to the voices of many justifiably concerned Victorians.

“On behalf of The Nationals I will keep fighting for an end to Daniel Andrews’ sustained harassment of our timber workers and communities.” 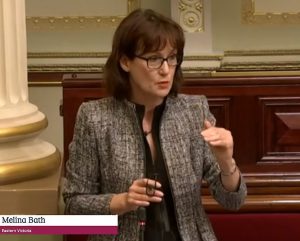 School Education must not be sacrifice for a third straight year