The Andrews Government has doubled down on its plan to force Morwell fire brigade volunteers to relocate to a new site as a tenant of Fire Rescue Victoria (FRV) in state parliament today.

Morwell CFA volunteers are staunchly opposed to the Andrews Government plan to impose co-location within its new FRV Morwell station.

“Instead of acknowledging the Morwell CFA’s legitimate issues, Minister Symes pushed it away and kept herself at a convenient arm’s length.

“In an email sent to Minister Symes, volunteers have outlined the deteriorating nature of the relationship between staff and volunteers and the negative affect it is having on operation capability.

“Members of the Morwell Brigade are adamant, if Labor continues with its plan forcing volunteers to move ‘the Morwell Fire Brigade will cease to exist’.

“Minister Symes is washing her hands of the issue, deflecting any ’talks’ with volunteers back to the Department”.

Ms Bath said if Labor forces co-location, Morwell CFA volunteers won’t have any control or ownership over the facility, under the Andrews Government plan they will be tenants only.

“Equipment and assets, including the CFA’s McDonald Street premises which volunteers spent countless hours fundraising for will be swallowed up by the Andrews Government – its activities and access will be at the whim of FRV,” said Ms Bath.

“Other towns operate with separate brigades and career firefighter stations, Moe and Eltham as two such examples, I raised for the Minister’s attention.

“For over a century Morwell Fire Brigade has served residents with distinction, tuning out consistently at all times of the day or night to protect the community.

“It is untenable that Labor is be forcing our proud volunteers into co-location as tenants and stripping away their independence.

“Morwell volunteers have offered a number of scenarios, which allow the brigade to maintain its independence and continue to serve our community, the Minister must listen and not callously dismiss over one hundred years of service.” 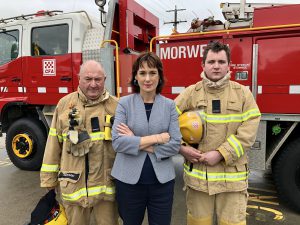