Latrobe Valley plumber, Martin Cameron, has been endorsed as The Nationals candidate for Morwell for the November state election after a grassroots preselection ballot on Saturday.

Mr Cameron is a 53-year-old father of three who has run the family plumbing business for the past 22 years. He is a seven-time Traralgon Football Netball Club premiership player, past president and current reserves coach and senior assistant coach, as well as being a multiple LVFL/Gippsland League and Victorian Country representative.

“It’s a great honour to be endorsed as The Nationals candidate for Morwell and I will be taking up the fight for the people of the Latrobe Valley.

“I was motivated to put my hand up because I think this region has been ignored for too long by Labor and we need someone who is prepared to fight for local jobs, industry and health and education.

“As a tradie I know the challenges of being in business, but I also spend a lot of time at kitchen tables listening to clients and the difficulties they’re having with day-to-day life.

“There’s no doubt cost of living pressures are really biting at the moment in the Valley.

“I also think working people have been abandoned by the Labor Party for inner city votes – blue collar workers in the Valley like me are seeing that Labor is no longer interested in them.

“I can see that only The Nationals will fight for our country jobs, industries, services and infrastructure.

“It’s policies like the 25 percent Regional Infrastructure Guarantee that will ensure we get our fair share in Gippsland and send a signal to Daniel Andrews that Victoria doesn’t end at Pakenham.”

The Nationals Member for Eastern Victoria, Melina Bath, who has also been endorsed again for the Upper House, said Mr Cameron is the perfect fit for the seat of Morwell, which now includes Moe/Newborough, Morwell, Yallourn North, Traralgon, Churchill and surrounds.

“Martin’s been a local champion for a long time, and as a tradie he works right across the Valley with people from all walks of life.

“He’s a down-to-earth person who knows the value of hard work and reward for effort – Martin will deliver for the people of the Valley.”

“Regional Victoria needs our voice heard in the halls of State Parliament and Martin will be a strong part of our Nationals team.” 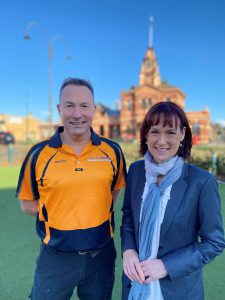