The Andrews Government’s lack of progress on the construction of the replacement Latrobe River bridge Tyers, has been criticised by The Nationals Member for Eastern Victoria, Melina Bath.

Speaking in State Parliament Ms Bath demanded to know why the Latrobe River bridge replacement has not been delivered, six years after it was promised to the Tyers community by the Premier.

Ms Bath said in 2015 the Premier announced the Latrobe River bridge replacement, boasting the project ‘was one of his first tasks’ and labelled it ‘long overdue’.

“If this project was long overdue in 2015, then six years later the Premier’s lack of action represents an epic fail and another broken promise,” said Ms Bath.

“Residents are deeply frustrated by the Andrews Government’s inaction on promised projects in Latrobe Valley and the replacement Tyers River bridge now joins this list.”

The existing Latrobe River bridge was built in 1936 and regular floods.  It can only support a 30 tonne load limit, forcing heavy vehicles to lower their speed to cross the bridge safely.

$9 million was allocated in 2015 to relocate and replace the bridge over the Latrobe River to better connect the Tyers community to Traralgon and improve the important freight transportation route by increasing its load limit to 42.5 tonne.

A tender for its construction closed in November 2017.

“Post flood, it took nearly two weeks for officials to inspect the structural integrity of the old bridge despite flood water having receded,” said Ms Bath.

“Tyers residents rely on the Latrobe River bridge to access vital services such as education and health care and any closure has a significant impact.”

Between 2012 and 2018, six people have been injured in car accidents travelling on the road which occurred on the curves north and south of the bridge and tragically, there has been one fatality.

Having met environmental standards, Regional Roads Victoria continues to list the bridge replacement project as active but no project timeframe has been published.

“On behalf of the community, I have called on the Andrews Government to quit stalling, prioritise the replacement bridge and provide a timeline for its completion,” said Ms Bath. 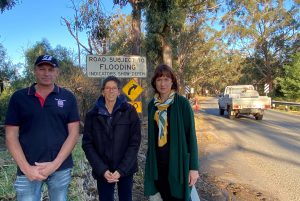 PrevPreviousLabor denies biosecurity risk with river camping free for all

Labor denies biosecurity risk with river camping free for all